Vince Wilfork has long been hailed a hero on the football field, dominating the line of scrimmage for the perennial contending New England Patriots. Earlier this week, however, Wilfork flipped the script and proved that he was just as much a hero off of the field when he helped rescue a woman that was the victim of a car crash. 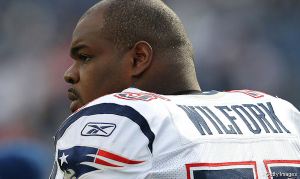 Driving home Monday morning, just hours after smacking down the Indianapolis Colts in the AFC championship game, Wilfork and his wife noticed a Jeep Wrangler flipped on its side on Massachusetts Route 1 highway. Pulling over, Wilfork approached the vehicle and looked to lend a helping hand. That’s when he saw 38-year-old Mary Ellen Brooks.

“Through football and the course of life, I’ve learned to try to stay poised in certain situations and I’m pretty sure she was kind of scared,” Wilfork said to the ever-present Super Bowl press. “The last thing I wanted to do was have her panic, and that was the first thing I told her, ‘Don’t panic. We’ll get you out of here.’ We got her out, the cops came and that was about it.”

Reaching into the car, the 6 foot 2, 325 pound lineman then grabbed Brooks and amazingly pulled her out with one arm (Russell Wilson beware). Wilfork and his wife, Bianca, then waited with the woman (who ended up being arrested for driving under the influence and negligent operation of a motor vehicle) for police to show up and help her out.

Monday, Wilfork reflected on the incident by saying, “I think anybody would do the same thing. I saw the lady in there and asked her if she was OK, could she move. She grabbed my hand, and kind of talked her through [it]. It wasn’t a big deal; it was seeing someone that needed help and helping. I was just trying to get her to safety.”

“You kind of reflect on life a little bit,” he then added. “Here I am, we won the most important game of our season, and flashing right in front of your eyes is the life of someone who is in danger. … After I drove off, my wife and I kind of talked in the car and said there are things that are a lot more precious in life than games or anything you accomplish in life. There are things out there that are more important. It showed last night, even though we won the AFC championship, it was life and danger. We were just happy to help.”