Early this morning, a Delaware highway was jammed up and blocked for 5 hours when a truck flipped on its side and thousands of chickens flocked the road.

The accident took place at about 4 a.m. at the split between U.S Routes 13 and 113. According to reports, the accident occurred when the southbound truck attempted to negotiate a turn, causing his load to shift and his trailer to fall over on its side.

In an interview with the Dover Post, Elton Maddox—the owner of Maddox Brothers Trucking— said, “The driver said the load shifted and it all just went to one side. It wasn’t due to speed or anything like that.”

When asked if the driver was intact, Maddox also said, “I just got off the phone with him, and he’s alright.”

Fortunately, there were no other reports of injuries. There were, however, thousands of road rage filled drivers late for work, strangely craving chicken and waffles. 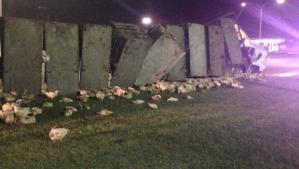