In a new video, Tesla demonstrates their new autonomous software/hardware that will be included with all new Tesla’s from this point forward. In their showcase, a man is driven from his home to his office without any input whatsoever. When it arrives at the parking lot, the car lets the man exit and go into the building while the car proceeds to parallel park itself between two other cars.

Prior to this, a Tesla would come equipped with a semi-autonomous “Autopilot” feature that allowed it to drive itself on freeways without driver assistance. Autopilot has been criticized by many for giving drivers a way to release control of their vehicle for long periods of time and get distracted with other activities such as sleeping or watching movies. So far there have been two deaths surrounding Autopilot-engaged Tesla vehicles. Despite that, Tesla’s CEO Elon Musk firmly believes that autonomous vehicles and even semi-autonomous vehicles will significantly reduce the number of automotive related deaths across the planet. “The probability of having an accident is 50 percent lower if you have Autopilot on,” Musk said earlier this year.

Full autonomy still seems to be out of our reach for years to come from a regulatory and technology standpoint. Autonomy will require extended testing in order to make it perfect, or nearly-perfect. And most people are simply not comfortable with letting the machine assume control at this time. That may change with time if automakers can prove to us that it can be a reliable system capable of reducing the chance of a crash.

Elon Musk fantasizes that drivers will be able to summon their autonomous car from across the country by 2018. Based on that, we may see full-autonomy available in the form of the Tesla Model 3 when it comes out that same year. However, it could be limited in how many of its autonomous features can be used until they are unlocked By Tesla. As more autonomous cars become available, more data will be collected from real world testing allowing automakers to learn and make improvements to their systems.

Tesla is definitely the biggest champion for self-driving cars. Their system was intended to be much more affordable for consumers compared to Google’s LIDAR, which uses repeating laser light to create a 3D map of the car’s surroundings that is accurate down to a couple of centimeters. The LIDAR system alone costs eighty thousand dollars, Tesla advertises that their autonomous package will cost $8000 to unlock (remember that all Tesla vehicles will come equipped with it regardless).

Elon Musk believes their system, which uses eight active cameras, ultrasonic sensors, radar and a supercomputer, makes much more sense for cars than Google’s LIDAR. “… I don’t think you need LIDAR. I think you can do this all with passive optical and then with maybe one forward RADAR”, Musk said when he introduced Autopilot a year ago. Tesla’s price for full autonomy is considerably less than Google’s technology, and it also establishes a baseline price for future autonomous systems. The Tesla CEO isn’t claiming that Google’s LIDAR is an inferior system, he just believes that it’s a bit overkill for something like a car. SpaceX, founded by Elon Musk, actually uses LIDAR for its Dragon spacecraft when docking to the space station. 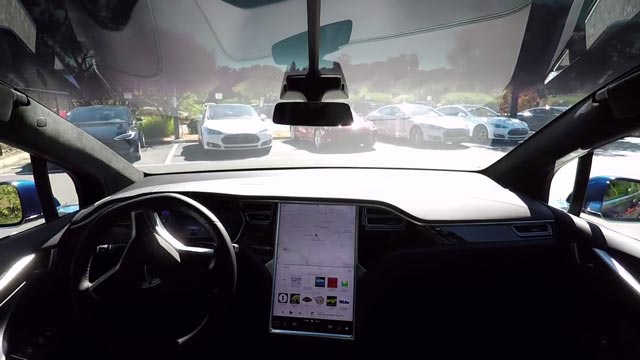 All current Tesla owners won’t be able to upgrade their cars with the new system. Musk claims it would be more cost effective to just buy a new one. For now they’ll have to settle for the first generation of Autopilot, which is still going to be supported through over-the-air updates.

We believe that self-driving cars cannot be stopped and they will eventually become the norm. They will greatly impact our lives in ways that we can’t predict. What do you think will happen?