This sculpture, known as Graham, is what a human would look like if they evolved to survive car crashes. Graham is part of the Towards Zero road-safety campaign, which is a vision for a future free of deaths and serious injuries on the road by Melbourne, Australia’s Transport Accident Commission. 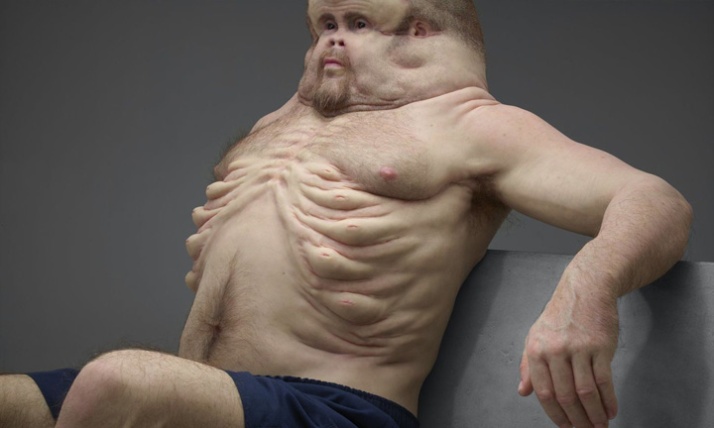 Designed and created by Dr. David Logan, Road Safety Engineer; Christian Kenfield, Trauma Surgeon; and Patricia Piccinini, Visual Artist, Graham has evolved to have a much larger skull to absorb more forces to protect the brain. He has a sunken face with some extra fat for added protection, no neck at all to reduce the chance of back and spine injuries, and skin that is much thicker to prevent severe cuts. Don’t forget about his recessed ears and nose…

Graham was also given an extra joint in the lower leg to give him the ability to quickly jump out of the way of a car. No matter how awesome that ability would be, it sounds too far fetched even for this evolved human to realistically do. Besides that, we imagine it would be quite difficult to operate a car without a neck.

The weirdest evolutionary trait definitely has to be the external sacks to protect his rib cage from trauma. “All I did was enhance [the ribs] and fortify them,” says Piccinini. “On impact, these airbags expel this liquid and thereby take the force of the accident.” That just sounds gross, but having your own biological airbags would certainly help you resist major chest area damage.

Graham might be the perfect specimen for a different world. However, he looks just a bit too alien compared to the humans of our world. We’re waiting for Melbourne’s TCA to come up with a female companion for Graham. Maybe he will find love some day.

How would you describe this theoretical, crash-proof human?