Women and children walking around with masks on; politician’s calling the city “unliveable”; over 1.2 million people having died prematurely due to “ambient particulate matter pollution”… those are all different problems associated with Beijing’s ungodly amount of smog. 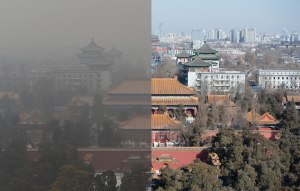 It’s a disgusting problem that’s been battled time and again by the Chinese government, but it appears that the government has not taken drastic enough measures to combat the issue. In fact, earlier this year, Beijing’s PM2.5 readings hit 550 micrograms per cubic meter; that’s more than twenty times the recommended limit set by the World Health Organization!

This,of course, is not a new problem for Beijing, either. Back in 2013, many were referring to the pollution crisis in the city as the “Airpocalypse.”

Journalist Dan Gardner describes the scene at that time by saying, “Prior to January 2013 Chinese people could, of course, see the blanket of soot that enveloped the city and feel the sting in their eyes and the scratchiness in their throat, but they had no way of understanding the serious long-term cardiovascular and cardiorespiratory damage that the microscopic particles in the air they breathed could do to their bodies.”

Now, in a drastic move to combat the problem, the Chinese capital has actually placed a restriction on which cars can drive on certain days!!! According to reports, the municipal government has proposed an even-odd plan that would only allow vehicles with license plates ending in an odd number to drive on odd-numbered days and vehicles ending in even numbers to drive only on even-numbered days.

The plan would also allow all electric vehicles to be exempt from the rule.

This, of course, is not the first time that the Chinese government has attempted such a solution. In fact, a few years ago, they attempted to limit the number of car registrations during a given year, while also promoting electric vehicle buying. However, it appears that those plans have had little impact on one of the country’s most disturbing problems.