Over the past few years, Ford has been looking to expand globally and grow their company. Earlier this week, these efforts grew monumentally with the opening of a new $760 million assembly plant in Hangzhou, China.

This plant will be responsible for building the new Ford Edge crossover, a car that Ford believes will be wildly popular among the Chinese people and around the world. In fact, the 2015 Edge is the first to go global and is scheduled to be sold not only in China, but also in Europe and the United States. 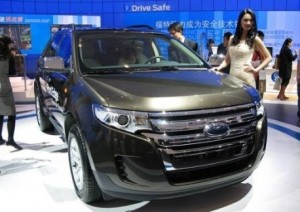 In a statement, Ford president and CEO Mark Fields said, “This world-class facility will help us accelerate the delivery of high-quality, innovative products to our customers in China… The new 3-row Edge demonstrates Ford’s commitment to producing quality, safe, fuel-efficient and smart vehicles.”

This brand-new $760 million assembly plant is now Ford’s fifth assembly plant inside of China and is alongside one engine plant and one transmission plant, as well. According to Ford, the new Hanzhou plant will be capable of producing 250,000 vehicles per year, bringing up their annual Chinese total to 1.4 million vehicles.

That new number helps Ford surpass Hyundai inside of the Chinese market and puts them behind only Volkswagen, General Motors, and Nissan inside of China. For a company that has been trying to hit the global market hard for the past few years, that is certainly welcome news. Now, with the recent surge in SUV popularity, Ford looks like it could make an even bigger jump globally.

“Here in Hangzhou, we are laying the foundation for the future of Ford globally,” said former president and CEO Alan Mulally back during the plant’s  original ground breaking. “At Ford, our goal is to offer fuel-efficient, high-quality vehicles from our global portfolio that customers in markets like China want and value. This state-of-the-art facility will help us reach the goal of increasing worldwide sales nearly 50 percent.”