Late Saturday, Tony Stewart’s Eldora Speedway website was hacked and a message was left crediting the Islamic State. According to reports, the message stated: Hacked by Islamic State. We Are Everywhere 🙂

The message was reportedly up for less than half an hour when Eldora representatives noticed it and took it down. Currently, the issue is being investigated by officials. Robert Slack– Eldora Speedway’s general manager– said that authorities would not confirm that the message was actually from an Islamic radical group. 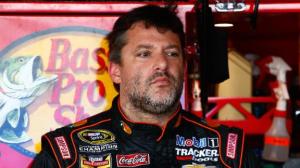 Preparing for the Kobalt 400 Sprint Cup race at the Las Vegas Motor Speedway, Tony Stewart was shocked to hear about it from reporters.

“Seriously,” he said in disbelief, then added, “I guess we’re a big enough blip on the radar now if we’ve gotten their attention. Maybe we can get them season passes.”

“If there’s anybody I’d want mad at me, I guess it would be them.”

Obviously, Tony did not have much esle to say about ISIS that we don’t all already feel and know– which is that they are a cowardly organization that hides in the shadows. They leave messages on random websites because they are too pathetic to come out in the open and say it in public. And that’s okay; America will squash them in due time.