In the early 2000s, amidst declining sales and looming labor strikes, Harley Davidson was in the middle of a crisis. It appeared that the brand was fading, and even worse, it was losing out on sales.

Fortunately, in 2009, that all started to turn around under the direction of CEO Keith Wandell. Under Wandell’s leadership, the brand underwent a resurgence and the company’s stock soared by more than 200%. On top of that, during the last 6 years, Harley also generated more than $300 million in annual savings while growing in international markets.

“We have accomplished a lot to reposition Harley-Davidson for a bright future,” Wandell said in a press release, “and the most important achievement has been the development of great leaders at all levels of the organization. Our executive team has been integral to the creation and execution of our strategy and assuring a strong company going forward.”

This era, however, is now coming to an end as Wandell has decided to step down as company CEO. To replace him, starting May 1, Harley has promoted Matt Levatich to take over the reins.

So, why did they choose Levatich?

Well, Levatich, age 50, originally started at the motorcycle juggernaut way back in 1994. Since that time, he  has worked a number of prestigious positions inside of the company, including being the Vice President and General Manager of Harley’s Parts and Accessories business, Vice President of Materials Management, and worked as an ambassador to enhance the company worldwide. 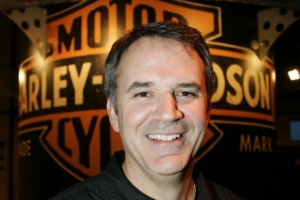 Because of this background, the leaders at Harley (including Wandell) feel like the right man is being given the job.

Wandell says, “Matt’s tremendous leadership abilities and track record, together with his drive for excellence and deep knowledge of the business, make him an outstanding choice as Harley-Davidson’s next CEO.”

“He has been a driving force behind our focus as a customer-led organization, and the innovation and continuous improvement that are expanding Harley-Davidson’s industry leadership. I have great confidence in the company’s future under Matt’s guidance.”

For Levatich, this opportunity is just the culmination of years of hard work and dedication– a mindset that he plans to continue to build into the future.

Levatich says, “It’s a great honor to become the next CEO of this iconic company. As we look to the future, we believe there are tremendous opportunities to build on our many strengths.”

“Harley-Davidson is one of the world’s most-powerful and revered brands, and through our strategies to provide unrivaled products and experiences for our customers, we aim to extend our reach and work to realize our full potential as a growing global company.”