Jeep is coming off the best sales year in company history, selling over 1 million vehicles during 2014 alone. Helping to propel the brand to these new heights, of course, is the almighty, battle tested Jeep Wrangler. 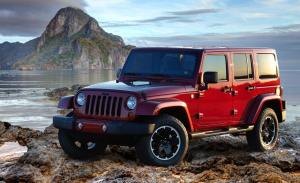 Some may argue, though, that the Wrangler wasn’t the main factor responsible for last year’s sale spike, as the Cherokee models provided the biggest boost in sales. But don’t get it twisted! The Wrangler has been the heart and soul of the company’s image for decades now and has helped other brands take off because of the “off-road cred” it provides.

Seeing Jeep, as well as Ford (with the almighty Raptor!), gobble up the off-road market over the last year has inspired a slew of companies to hop in the off-road game, including GM.

In fact, in a report coming from The Wall Street Journal, GM is rumored to be working on what they hope to be a legitimate threat to the dominating Jeep Wrangler. Their inspiration for the vehicle??? The HUMMER!

WSJ writer Christina Rodgers writes, “GM executives said the new product would borrow cues and capability from a Hummer brand that appealed to off-road enthusiasts but went by the wayside amid GM’s financial crisis in 2009 and waning support for vehicles perceived as gas guzzlers.”

“GMC’s U.S. Chief Duncan Aldred has been vocal on the need to capitalize on the brand’s growing momentum by expanding and strengthening its portfolio.”

This Hummer-like vehicle would be the second off-road variant that GM has been involved with recently. If you remember correctly, GM also unveiled the Colorado ZR2 Concept at the Los Angeles Auto Show late last year. Without a doubt, GM is going hard after some off-road legitimacy.