Late last week, Patricia Mincey filed a lawsuit against Honda and Takata, claiming that a malfunctioning Takata airbag left her paralyzed from the neck down after a minor accident. 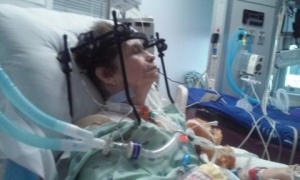 In court documents, the 76-year-old Mincey says that on June 15th she ran a red light in her 2001 Honda Civic while travelling at about 20 mph and not wearing a seat belt. At that time, suddenly, she collided with an SUV– which itself was flipped and overturned.

According to the lawsuit, the airbags in Mincey’s Civic inflated too forcefully at the time of this accident, paralyzing her from the neck down.

Adding to the twisted story line is the fact that Mincey’s car was recalled just four days after her accident, which was in all actuality years after the companies knew about the defect.

“This litigation takes Honda and Takata to task for their egregious disregard for consumer safety,”said Mincey’s attorney, Theodore J. Leopold, in a statement. “The companies were aware for more than a decade that these air bags had the potential to violently explode and seriously injure or even kill occupants, yet they failed to take responsibility for producing and installing a safe product and/or recalling the defective air bags. Even in the June 2014 recall, Honda downplayed the situation by using the term ‘energetic’ air-bag deployment to describe the very defect that catastrophically and permanently injured Patricia Mincey.”

Mincey, of course, is not the only person that has grievances with Takata. All in all, there have been over 1,700 cases involving Takata– a number that led to a record $70 million fine from the NHTSA late last year.

Differing from other cases, though, is the fact that Mincey’s airbag did not shoot out metal shrapnel during deployment, as it had in other malfunctions. Instead, Mincey and her lawyers are focusing on the force exerted during deployment.

Leopold says that the shrapnel, however, is not at the heart of the issue; he says, “Everybody is focusing on the metal fragments, but the underlying reason why this occurs is the initiation of the over-excessive pressure. The same mechanism of failure is applied.”

Currently, Mincey is receiving care at a long-term care and rehab center in Florida as she awaits legal proceedings to continue.

In regards to this particular case, Honda said in a statement, “[Our] ongoing investigation into this crash thus far has uncovered no facts or substantiating evidence in the police investigation to support the defect allegations made by the plaintiff.”

So, what do you think? Does it appear that Honda and Takata are at fault or does some of the blame appear to fall onto Mincey’s shoulders?