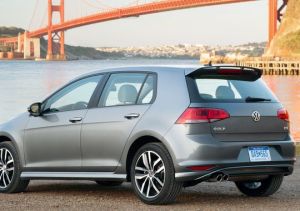 The North American International Auto Show officially kicked off with a bang this morning when they announced their car of the year award winner. Taking the prize  was the Volkswagen Golf/GTI, beating out heated competition from the Ford Mustang and Hyundai Genesis.

“It’s a competitive set when you look at the Golf, and the Genesis and the Mustang” said Ford President of the Americas Joe Hinrichs following the announcement. “We knew it was going to be a very competitive competition. We recognize and salute the Golf for winning.”

Priced a little above $18,000, the Golf is available in two-door and four-door hatchback body styles with a choice of four major trim levels: Launch Edition, S, SE, and SEL. As for the engine, a brand-new 1.8-liter turbocharged four-cylinder, which produces 170 horsepower and 200 pound-feet of torque, has been established as the car’s base engine. Drivers also have the option between a five-speed manual transmission and a six-speed automatic.

The car has become so popular over the past five years that it has developed into an award juggernaut, reeling in prestigious victories as the World Car of the Year and European Car of the Year.

Only adding to the laundry list of accolades, this year’s Golf was also being lauded; it even racked up a perfect rating from Car and Driver by both the critics and the users. In their review, Erik Johnson says, “The latest Golf is a phenomenal car—full stop… It’s so good, we named it to our 10-Best list for 2015.”

With that type of resume, winning a North American award was pretty much an inevitability. 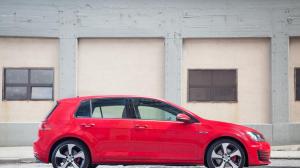 Still, Volkswagen CEO Michael Horn says he was “flabbergasted” when he heard about the victory.

“We didn’t expect this award,”  Horn added. “It’s confirmation of the way we’ve chosen to go forth. It’s a starting point to get back on track here in U.S.”

Undoubtedly, helping to solidify this year’s victory was Volkswagen’s perfection of middle class versatility and practicality, as well as an amazing, intuitive symbiosis with middle class values.

“The Volkswagen Golf gains fuel efficiency, safety and functionality while simultaneously costing less than the car it replaces,” says Karl Brauer, senior analyst at Kelley Blue Book, in an interview with USA Today. “If the 2015 Golf signifies where VW is headed the German automaker’s future looks bright indeed.”

During a time in which the middle class is starting to regain its footing within the American landscape, the voters at the North American International Auto Show certainly made a statement that versatility and practicality are attributes that cannot be overlooked.