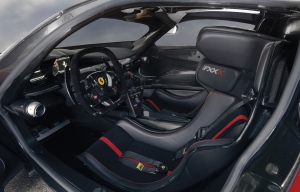 Since its release, the Ferrari LaFarrari has garnered a reputation as a killer– as a baby-eating, mama-spanking monster of a vehicle. Firing out a demented 950 horsepower and hitting a head scalping top speed of 218 mph, the LaFerrari has become an instant legend amongst super cars.

After handing out a perfect 5 out of 5 rating, Car and Driver’s Eddie Alterman said, “I’ve driven cars that have tried to kill me before, but none with such a vast résumé of homicidal know-how….It is less a conventional supercar than a carefully orchestrated system of technologies resulting in something both brutally animalistic and mechanically pristine.”

But what if I told you that this Godzilla car could get even more ferocious?

Well, that’s exactly what Ferrari did with their new upgrade: the FXX K, which is set to debut at Abu Dhabi’s Yas Marina circuit next weekend.

This car, of course, comes from a lineage of “XX” upgrade cars, which include the Enzo-based FXX and the 599XX. Each of these models are enhanced prototype versions of their Ferrari counterparts, built specifically for the super rich that demand them. None of them are street legal, but ar instead designed solely for track use.

As far as the FXX K goes, it features the same (but enhanced) dual motor set-up as the LeFerrari: a combined gasoline powered V12 engine with an AC permanent-magnet synchronous electric motor. This system helps to crank out a vicious 1035 horsepower!!

Helping to improve on aerodynamics, Ferrari says about the design…

The front of the car is dominated by a twin-profile spoiler and a larger splitter, which is 30 mm lower, with a gap in its centre. This design is an application of the concepts developed to improve aero balance in the GT category of the WEC, which Ferrari has won for three consecutive years. Two pairs of vertical elements, an endplate and, externally, a dive plane, together with vertical fins channel the air towards the car’s flanks, generating a longitudinal vortex that creates a localised depression. This in turn sucks the wake from the wheels to the outside of the aerodynamic underbody. Along with the side skirts that extend out from the sills, the vortex helps isolate the airflow from the underbody to boost its efficiency.

The solutions on the rear of the car are highly sophisticated, too. The tail section is now higher and the mobile spoiler extends further for a total increase in extension of 60mm when fully deployed. A vertical fin and a small wing each side of the tail act as guide vanes in the low drag configuration and boost the spoiler’s efficiency in the high downforce one. This system also creates considerable downforce at the rear of the car, allowing the use of an extreme diffusion volume for the rear diffuser which optimises air extraction from the underbody. The section of the flat underbody just ahead of the rear wheels is also exploited to the full to generate downforce thanks to the reduced pressure in the wheel arch guaranteed by the direct connection to the rear of the car by a by-pass duct.

As far as the official time numbers go, we won’t be privy to that until its debut next week, so stay tuned.