Motor Trend has just announced that the 2015 Chevrolet Colorado pickup has won its annual Truck of the Year Award, topping the highly competitive, aluminum-bodied Ford F-150. Considering that this is one of the highest honors in the industry (Motor Trend is the original publication to hand out these Car and Truck of the Year Awards), this will certainly give GM a boost as they attempt to snag dominance in the midsize pick-up market.

In a statement, the magazine said about their decision, “The editors were particularly impressed with Colorado’s handsome, clean-sheet design, ‘right-sized’ package, excellent handling, and overall capability”

Motor Trend’s editor-in-chief Ed Loh also went on to say that the seven editors responsible for voting were highly impressed with the Colorado’s steering, handling, best-in-class fuel economy, and spacious interior. Also praised was the Colorado’s “potent, yet efficient powertrains,” which are available as a 2.5-liter four-cylinder engine and a 3.6-liter V-6.

“It basically fixed everything that was wrong with the previous generation Colorado. And that thing was a dog,” Loh said. “It was totally not competitive and GM knew it and they basically delivered a brand new, very capable, best-in-class pickup truck in our minds.”

But where exactly did the Ford F-150 fall short?

Well, Loh explains by saying, “Ford built a really, really good truck. It’s excellent across the board. They’ve been really fast, they’ve always been fast especially with the new EcoBoost engines. They’ve always been capable. This new one is quiet and has a lot of great features.” 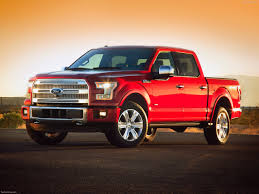 “But there are things like handling which we felt were a little light, a little nervous. Some of the new technology that they have, including lane keep assist. … very aggressive and needs a little refinement there. But fundamentally we know there’s another truck within the segment that gets better fuel economy without having to go to aluminum. That was kind of a big deal for us.”

The Ford F-150 and the Chevy Colorado may have been the front runners heading in to win the award, but they were not the only ones competing. Some of the others being considered include:

As far as the testing goes, editors put each of these vehicles through a series of real-world road tests, both with and  without payload or trailered loads. Some of the tests included a 0-60 mph and quarter-mile acceleration run, as well as continuous flow-rate tests during a 3 hour, 88 mile drive through the Los Angeles area.

In the end, nothing quite measured up to the Colorado, a fact that GM is very proud of.

“To win the award is crazy and we’re super excited about that,” said Tony Johnson, the Colorado’s marketing manager. “It’s a very prestigious award and we’re very honored to receive it. Motor Trend carries some weight with customers … [it’s a] respected third-party publication that’s just out there validating our product for us.”