In an interview with German magazine Der Spiegel, Elon Musk said that a major collaboration between Tesla and BMW may be in the works. 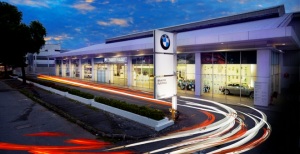 When asked about the details, Musk said, “We are talking about whether we can collaborate in battery technology or charging stations.” He also went on to say that he believed Tesla would have a battery plant in Germany within the next 5-6 years.

For anybody following Tesla closely over the last year, this potential collaboration should come as no surprise. Meetings between the two companies concerning the dynamics of charging stations have occurred regularly. Musk has also consistently heaped praise on the German manufacturer for some time now, saying their production of carbon fiber reinforced parts was “interesting” and “relatively cost efficient.”

Without a doubt, this collaboration would be a HUGE move for BMW– a company that has had certain struggles in their transition to electric vehicles.

Over the past few years, Tesla has been snagging more and more of the market as they continue to be the front runner for automotive ingenuity and technology. These developments have been coveted by investors, rival companies, and even American states.

In fact, earlier this year, a slew of states were practically dropping their panties, begging Tesla to move their big battery production plant inside of state lines. After a long and bitter battle for Tesla’s love, Nevada won the fight– snagging thousands of jobs and billions of dollars in revenue for their state.

Now, it’s BMW’s turn at securing a lucrative deal. If BMW were to snag a partnership, it would immediately elevate them to the front lines when it comes to the future of the auto industry– a position that could secure thousands of jobs and billions of future dollars.

Of course, this move isn’t just beneficial to BMW. It could also help Tesla move up from the middle-tier of American manufacturers and start to challenge the big dogs of the industry (Ford, GM, etc.) In the end, it’s a win-win move for both companies, and it seems to be an opportunity that shouldn’t be passed up.