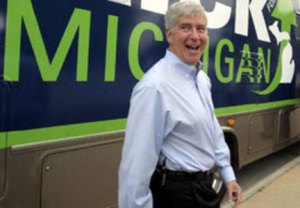 Today, Michigan governor Rick Snyder signed a bill that strengthens a law banning automakers from selling vehicles directly to customers. This, of course, was an act that Elon Musk and his company Tesla Motors Inc. has been battling for months.

Just last week, Musk came out with a letter to customers stating, “The Michigan Automobile Dealers Association succeeded in passing a bill that is harmful to consumers. The bill, HB5606, was originally a single amendment to existing law designed to ensure that the car dealers can tack additional fees on to the purchase price for all vehicles (from any manufacturer) sold in Michigan. Such fees have a controversial history, are generally regarded with skepticism and have been the subject of consumer concern in other states.”

Obviously, Musk’s words had little impact on the Michigan governor. Snyder claims, as he has throughout the entire process, that he is only looking out for the consumers’ best interests. “We should always be willing to re-examine our business and regulatory practices with an eye toward improving the customer experience for our citizens and doing things in a more efficient and less costly fashion,” Snyder says.

Many observers have noted the precise, but not exactly simple, language used in the bill that was signed today. According to Musk, this language is just another step towards concealing what is going on.

Musk says, “The dealers managed to make a last-minute change to the bill in an attempt to cement their broader retail monopoly. Using a procedure that prevented legislators and the public at large from knowing what was happening or allowing debate, Senator Joe Hune added new language to lock Tesla out of state.”

Despite the damning bill being signed today, it’s not like Tesla didn’t see this one coming. After all, Musk himself has noted time and again that many of the Michigan politicians’ wallets will be impacted by the decision; “Unsurprisingly, Senator Hune counts the Michigan Automobile Dealers Association as one of his top financial contributors, and his wife’s firm lobbies for the dealers.”

Still, Musk couldn’t help but feel compelled to battle for his rights, as he should have. It’s a damn shame what has happened in Michigan and a handful of other states, but hopefully, Musk won’t give up his battle quite yet.