With even stronger ties than what’s seen between Hobbits and the Shire, Italy over the years has become a land synonymous with super cars, producing endless gems from Ferrari, Lamborghini and Pagani. But those three legendary Italian companies may need to move over, for at least a minute anyway.

Recently debuting a concept vision, the Tecnicar Lavinia is making waves across the super car industry for one reason: it is one of the first true ELECTRIC super cars.

Described by Digital Trends as “a Ferrari Enzo with a flattened nose,” the Tecnicar Lavinia is powered by an astonishing 789-bhp electric powertrain with an estimated 0-62 time of 3.5 seconds and a top speed of 186 miles per hour.

Amazingly, Tecnicar has gotten very ambitious with this bad boy while not garnering the flashy robes usually associated with a juggernaut automotive company. Instead, it is a company known more for selling small electric trains that are often seen at theme parks and popular tourist spots (check the picture to the left). But this lack of top-notch experience should not be surprising to automotive fans.

Over the last few years, there have been a number of companies (most notably Tesla) that have squeezed their nose into the rapidly changing auto game. Part of the reason for this is that certain major companies, for example Ford and GM and in this case the Italian super car big 3, have not given the electric movement the type of respect and attention that it deserved, opening the window for up-and-comers.

For us auto fans, that has made for an interesting and more unpredictable industry, a landscape that has allowed companies like Tecnicar to exist and potentially flourish. 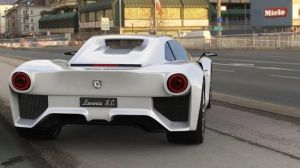