This week, the legendary Hot Rod Magazine is holding their annual Engine Masters Challenge. At this year’s event, there will be 30 of today’s top builders competing with 14 different engine families. There’s everything from big-block and FE Fords to LS engines and Gen II/Gen III Mopar Hemis.

The mission for this year’s competition is building: two-valve-per-cylinder hot street engines on pump gas with hydraulic roller cams and heads with OE architecture.

After just two days, a couple of engines have raced out to the front of the pact. Here is the top five: 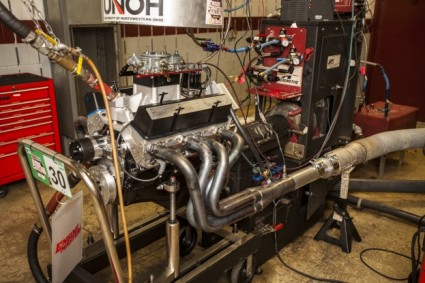 Like always, these bad boy engines are enough to make even the most poised gear head cream in his pants. Personally, I have to admit that following the event has been extremely, extremely enjoyable, especially when they get into the in-depth profiles.

One of my favorite profiles so far was of Barry Rabotnik from Survival Motorsports. According to Hot Rod’s website, Barry is a constant fixture at the event, and this year brought in a 433ci mill Ford-Edsel engine. During his testing, the engine cranked out a fiery 636 horsepower and 562 lb-feet of torque.

But what really made his profile stand out was that Barry had used this engine all year during races to also prove the engine’s durability. Check out the awesome video here…