EVERYBODY GET READY. We are about to enter the most fun time of the year: the Auto Show Season.

Sure, some people scoff at these high-profile events, swearing that they are pointless and filled with irrelevant concept vehicles. But don’t listen to that; those people are idiots.

These Auto Shows are extremely important because they not only serve as a battleground for competing companies, but they also serve as a way to inform everyday people about the future of our roads.

The auto show is the ideal venue for shoppers because they can browse without being pestered by salespeople, says Michelle Krebs (a senior analyst for Edmunds) in an interview with Fox News.

“It’s like the circus. It’s the only place you can see it under one roof.”

Fortunately, after months of waiting, the first of these shows- the Paris Motor Show- kicks off next week on October 4th.

There is already a lot of speculation as to what expect at this year’s show, especially when it comes to the vehicles being produced in the European market. This, of course, means tons of appearances from Lamborghinis and Ferraris. Take a looka t some of this year’s most anticipated vehicles below: 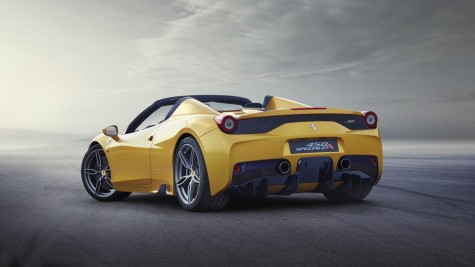 The Ferrari 458 Speciale A

Expected at this year’s show will be the Ferrari 459 Speciale A. According to reports, this vehicle will have an aluminum retractable top, and as expected, it will be blazing fast, reportedly clocking in with a 3.0 second 0-62 time!! Astonishing!!!

BBC News writes, “Underneath the skin, the Speciale’s mesmerizing mash-up of screaming naturally aspirated power and mind-boggingly clever electronics remains intact. That means a 4.5-liter V8 with 597 horsepower and 398 pound-feet of torque.”

Sadly, though, it looks as though there will only be 499 of these cars produced, so if you’ve got more money than you know what to do with, hurry up and get in line.

This is by far the biggest mystery of the year. There are very little details available about what Lamborghini is planning to do for the show; I mean, just take a look at the picture to the right and you can see what we’re working with for predictions.

Some reports have speculated, saying that it could be a hybrid, possibly called the Asterion. The only thing we really know is that Lamborghini is planning a big splash this year; “We also expect this car to expand Lamborghini’s reach, either in design or technology,” says Autoblog. Make sure you buckle up for this one. 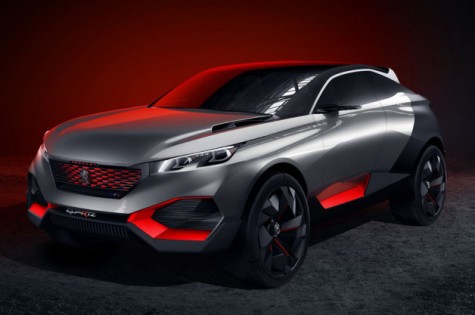 Around the industry, the Peugeot Quartz is being described as a high-performance CUV. According to reports, this vehicle will feature a 1.6 liter turbocharged four-cylinder engine that will rip out 270 horsepower and 243 pound-feet of torque, as well as two electric motors that each produce 114 horsepower to drive the front and rear axles.

The verdict is still out on the design, which looks like it came from one of Stallone’s bad, early 90s sci-fi movies. Can somebody pop-in a VHS of Judge Dredd real quick!! 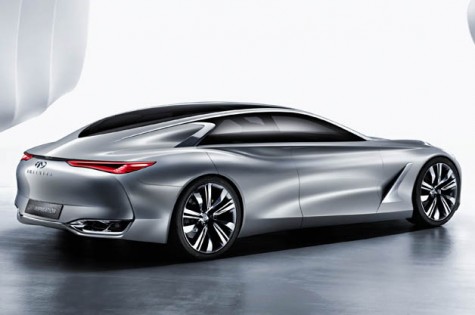 Certainly, one of this year’s most anticipated debuts will be the Infiniti Q80 Inspiration (please change that name!). It is obvious that this car was built with the aim of filling the company’s gaping hole in the large size, luxury sedan market.

In an official statement, Infiniti says about the car, “It’s an audacious and elegant step forward for Infiniti as a global player designed to shake up the status quo in the premium large four-door club—a no-compromise ambassador of drive-centric powertrain and onboard technologies.”

“In Q80 Inspiration, we wanted to capture that unforgettable feeling when you experience something important, something beautiful, something magnetic for the first time.”