Unfortunately, according to the statistics and unlike those other comparisons, it’s a deadly, distractive act. In fact, it is estimated by the Texting and Driving Safety foundation that approximately 1.3 million crashes a year involve texting and driving! That’s a huge number of unnecessary accidents. The foundation also states that texting and driving increases the likelihood of an accident by 23 times the normal rate. Amazing.

Despite all of these well-known and highly advertised statistics, it seems that drivers still can’t keep their grubby fingers off of the goods. Luckily, though, they might be forced to stay away because of a new, developing technology.

According to the Richmond Virginian-Pilot, a firm known as ComSonics is currently working on a radar-gun for police that will be able to sense the unique frequencies that come from cellphones when sending text messages. It’s very similar to a product they have already developed that helps cable companies scan and catch houses that are stealing cable.

ComSonics has indicated that they are extremely close to production and only have to perfect the device in a few small areas; for example, being able to identify what phone is sending text messages in a car with more than one person.

Obviously, this would be a huge step in eliminating this dirty little deed for the 44 states that currently have a ban on texting and driving.

“Every one of every age and generation has the ability to make a decision to drive distraction-free,” said Linda C. Deguitis director of the CDC’s National Center for Injury Prevention and Control. “It’s especially risky for young, inexperienced drivers who are already extremely vulnerable to crashes to be distracted when they are behind the wheel. Answering a call or reading a text is never worth a loss of life.” 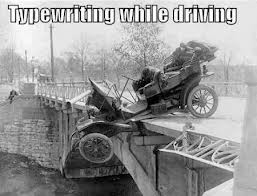 Until this device comes out, though, we should all do our best to try and keep ourselves from playing with our little toys. After all, it’s just bad karma, and it might just kill you!