Last month, after the Michael Brown shooting in Ferguson, Missouri, police were seen rolling through the Midwest town in tanks as they tried to keep peace. This got a lot of people wondering: what in the hell are the police doing with tanks? 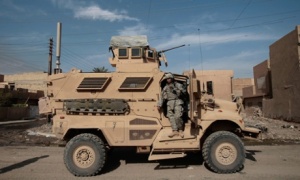 Well, if you thought there was something wrong with that, then you’re probably not going to like the recent moves by school districts across the country to militarize, either.

In fact, earlier this week, national headlines were made when the San Diego Unified School District decided that they need an MRAP, also known as a mine-resistant ambush protected vehicle. This vehicle cost the district about $5000 (for transportation), a significant mark down from the official value of $733,000.

Joe Yerardi of inewsource.org reports, “The school district got the MRAP for free as part of the U.S. Department of Defense’s Excess Property Program. The program, commonly referred to as the 1033 Program, sends unneeded military equipment like weapons and body armor to local police forces for no cost.”

Weighing in at over 15 tons, this 6×6 beast has got a lot of people up in arms, asking why in the world would a school ever need something like this?

But some people are still concerned, especially considering the fact that there are countless reports of schools across the country acquiring high-grade military weaponry.

Actually, just today, there was this report coming from the Tampa Bay area; “The Pinellas County School District has purchased 28 M-16 assault rifles from the federal government and is preparing to assign them to school police officers in the upcoming weeks.” Are these two coinciding stories really just a coincidence?

For some, none of that really matters; they just see this as a savvy business move. Andy Hinds of The Daily Beast writes, “Despite the very long odds that this acquisition will ever be used, and the sometimes-clumsy was the surprise rollout has been handled, I appreciative the district trying to take advantage of programs that will bring assets to our schools on the cheap.”

So, what do you think about these acquisitions?

Are these acquisitions something to worry about? Are they necessary? Or is it just the school district being business savvy?