Over the past few years, Ford has been planning their world takeover, stating over and over that they want to expand their operations overseas.

“[In 2014], we are embarking on our most ambitious global launch year ever to meet customer demand for our products around the world,” said Raj Nair, group vice president of Ford global product development. “We are investing even more through our One Ford plan to serve more customers, in more segments— and deliver profitable growth.”

Well, in regards to China, this world expansion was officially set in motion earlier this week as Ford began delivery on two Lincoln models: the MKZ and MKC. By 2016, Ford also plans to incorporate the Navigator SUV, the next-gen MKX crossover, and the upgraded MKS Sedan to the Chinese market.

In an official statement, president of Lincoln China said of this week’s delivery, “This is a significant milestone for Lincoln globally. This is the culmination of months of teamwork and collaboration both in North America and here in China.”

In the past, Ford, as well as some of the other major American manufacturers, has had some major missteps when trying to transition itself into a global company. Obviously, much of this rough expansion can be contributed to a conflict of taste.

As we all know, America loves a big and aggressive vehicle that is capable of withstanding the bumps and bruises of the road. It’s just who we are, and we’re damn proud of it.

Other countries, however, don’t always see eye to eye with us. That’s why Ford- across the board- has made special accommodations during this most recent transition (something they were not as willing to do in the past). 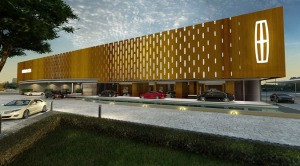 “Customers in the U.S. love it, but in China if you offer a car with new-car smell they won’t take delivery of it,” says Matt Van Dyke, the global brand director at Lincoln. “Details like the wide stitching on leather are also huge hang-ups for the Chinese luxury consumer from a craftsmanship perspective— they think it look cheap.”

“They don’t want a luxury badge as a sign of their wealth— they’re looking for something different.”

One of the first changes that Ford will be making for China has to do with their dealership atmospheres, which they hope look more like hotels than dealerships. Ford says they will be warm and welcoming, equipped with a tea room, a vehicle personalization studio, and complete sales and service transparency. But this is just the beginning; Ford will be doing anything they can to find success on a global market.