Recently in Instanbul,  a raised dump truck hit and collapsed a bridge on a busy E-5 highway. The incident ended up injuring 4 and killing one. 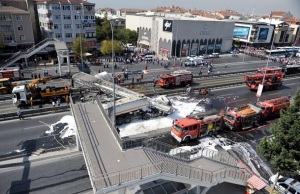 “The overpass collapsed right in front of me,” said Senay Senakar, a fellow driver that was closing in on the overpass. “We would have been trapped if I hadn’t been able to brake in time. Everything was normal and a fuel tanker hit the bridge There was no sound, so nobody suspected anything would happen. It collapsed within a matter of seconds and cars were trapped under it. People couldn’t understand what happened. Luckily, there wasn’t a lot of traffic in the area at the time; normally, there is always traffic congestion in that area.”

The incident took place at around 10 a.m on September 2nd. Strangely, this is not the first time that an incident like this has happened with the same exact bridge a year and a half ago. Local businessman Armagan Akgun witnessed both incidents and says, “It didn’t completely collapse that time, and they repaired it later.”

But as for the incident earlier this month, Akgun says, “I saw that the overpass was gone when I left the building I had been in. It happened at a distance of about 5 km from the Metrobus stop. A much greater tragedy could have taken place if it had collapsed onto the metrobus stop. It was a major shock. People evacuated the metrobuses.”

Over the years, Istanbul has become notorious for these type of reports. Just 4 years ago, a similarly devastating accident took place when a truck slammed into a pedestrian walkway bridge. This, not surprisingly, leads us to wonder: what in the hell is going on with the drivers and highway system over there in Turkey?

Well, it turns out that not even Turkish people have an answer for this question. Turkish writer Belgin Akaltan writes, “This is not even news anymore. Istanbul is a dangerous place for the man on the street.”