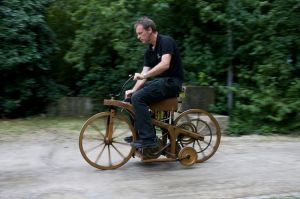 On August 29th, 1885, Gottlieb Daimler patented the first ever motorcycle. The invention came about because Daimler was tinkering with different ways that he might package the recently invented four-stroke engine developed by Nicolaus Otto.

Essentially, this Daimler motorcycle is a wooden bicycle frame- with foot pedals removed- that features the Otto engine and a spray-type carburetor. Certain people, however, do  not like to credit this as the first ever motorcycle, instead giving that credit to Sylvester Roper’s steam powered bike developed 18 years before in 1867. Unfortunately, that argument doesn’t really hold up because Daimler’s bike actually ran off gasoline, making it the actual precursor to the modern motorcycle.

Unfortunately, the original Daimler bike was lost sometime in the 1930s, but here is a video of an exact replica.