Last Monday, in the bayous of Biloxi, Mississippi, trucker David Fredericksen went all Batman on everybody and saved a woman and her 1 year old granddaughter from a burning car. The entire incident was also caught on the man’s dashboard camera and has now been uploaded to Youtube.

The dramatic sequence of events began when the woman and her granddaughter collided with another vehicle in a violent collision just a few hundred feet in front of Fredericksen. According to the description on the video, “The car struck the fuel tank of the semi causing a large fire ball. The doors of the car were jammed shut and the driver suffering a broken leg could not exit the vehicle.” 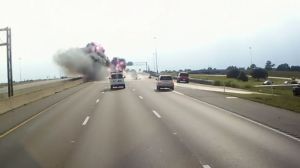 Seeing that the car had swerved across the highway and burst into flames, Fredericksen then slowed down and ran to the scene with a fire extinguisher in hand.  After slowing the fire down a bit, Frederickson looked into the car to see if anything could be done. There, he saw the driver struggling to kick her door out and the infant and her car seat tossed across the vehicle. He immediately pulled out both of the victims.

In an interview with Jalopnik, Fredericksen says, “I don’t feel heroic. Really what I feel is when I first got out of the truck, I was praying that they wouldn’t be dead. I just wanted to put the fire out, but when I saw they were alive, I was like ‘SWEET!'”

Thankfully, the infant was unharmed and the driver only suffered a broken leg. Fredericksen’s child and co-driver at the time writes in the video description, “Thankfully, my father had the presence of mind, bravery, and forethought of carrying a fire extinguisher, to be the first person on the scene to risk his own life in order to possibly save another and to inspire others and lead them into taking action. Everyone involved in the rescue effort is a hero in my books.”

In rewards for his heroic action, Fredericksen will be appearing this morning on Good Morning America. That is an interview that will definitely be worth watching!