Currently, two truck manufacturing titans- Ford and Ram- are locked in a bitter battle over who should hold the title for best in class towing. In fact, things have gotten so bad that Ford is threatening to sue Ram if it continues to advertise its trucks as the title holder. 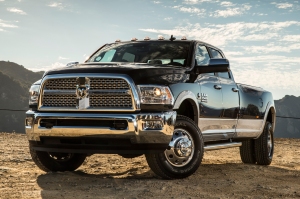 Ram, however, is standing firm to their claim, saying that Ford has been cheating the system.

According to Ram, the Ford 450 exceeds the 14,000 pound weight limit required of Class 3 vehicles. And this could be partially true, depending on what criteria you take into account.

Presently, all trucks are subject to a Department of Transportation test to determine their class rating. While Ram makes it comfortably under the 14,000 limit, Ford only comes in after “special modifications.”

As reported by Automotive News, Ford makes the 14,000 pound limit only when removing 154 pounds worth of items, including the radio, spare tire, tire jack, and center console.  Ford believes this to be okay because these items can in fact be deleted from a customer’s truck order.

Many disagree, though, and have made cries of injustice.  Dave Sullivan, manager of product analysis for AutoPacific, says, “That is a Class 4 truck under the skin. It has all the equipment of all their Class 4 trucks. They call it the F-450, not F-350. This has significant hardware changes to Ford’s own Class 3 Super Duty. That’s what puts it into the next class.”

If the Ford F-450 was considered a class 4 vehicle, it would become the only class 4 pickup offered by a major manufacturer.

It appears that both Ford and Ram are unwilling to budge on the issue, and both seem willing to fight the battle out in court.

“Additionally, unlike our competitors, our new 2015 Ram 3500 will hold the title and weight capacity while adhering to the SAE J2807 towing test criteria.”