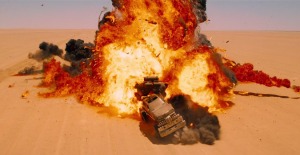 The new trailer is about as epic as a 2 and a half minute preview can get, featuring a wild post-apocalyptic world and even wilder vehicles in high speed chases and explosive crashes (see more up close pictures of the vehicles here). Seeing this new footage is enough to get someone’s blood boiling.

But despite all of this action, very little of the film is done in CGI, which of course is a break from recent Hollywood convention. 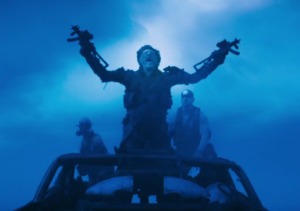 George Miller says, “Yeah, Mad Max is not a superhero. We don’t defy the laws of physics, it’s not a fantasy film. It’s basically a western on wheels. And I think if people see, I know when I see too much CG, that sort of takes me out of the experience. You want to have that sort of almost, I’m not going to say documentary experience, but you want to feel like you’re really immersed, like it’s really happening.”

“So we decided to literally do every car that smashed is smashed, every stunt is a real human being, even the actors do a lot of their own stunts, and so on.”

Starring in the lead role, originally made famous by a young Mel Gibson, is Tom Hardy aka Bane from The Dark Knight Rises. Throughout the clip, we see Hardy battling and being tortured by a rogue gang of misfits. At one point, Hardy can even be seen wearing an eerily similar Bane-like mask.

Also alongside the budding action star is Charlize Theron, who looks as beautiful as ever- despite a shaved head and one arm!

Currently, the film is slated to open on May 15th of 2015, and the internet has been taken over with rumors that Miller may be planning an entire trilogy of the famous film series. For movie fans and auto fanatics that would definitely be welcomed with open arms.