Originally conceived in 2005 by tire juggernaut Michelin, the Tweel was an instant sensation in the technological world, winning Popular Science’s 2005 “Best of What’s New” award. That year, TIME magazine also named it as “One of the Most Amazing Inventions” of 2005. 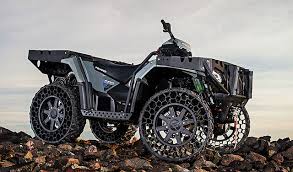 The Tweel, of course, combines both the wheel and tire into one package, allowing drivers to handle the roughest terrain without ever having to worry about getting a flat or refilling their tires. It has become so intriguing and respected in the industry that the military and high-end, money making companies have already implemented their use.

The Michelin Tweel, however, has had a loooooong-awaited, utterly frustrating mainstream consumer release date.

Fortunately for drivers and especially off-roaders, though, other companies (for example Polaris) have come out with their own variations of an airless tire. But it seems that this completely underrated innovation has gone unrecognized by many of our truck driving brethren. It’s time for a change.

Airless tires are in fact off-road performance studs. This performance superstardom, of course, is achieved through a number of uniquely wild designs, each aimed at satisfying a different type of driver.

One of the most important aspects of these airless tires are the spokes, which absorb road impacts in the same way that air pressure does in pneumatic tires. Adding to the flexibility (which is great for off-roading) are the tread and shear bands. These bands temporarily deform as the spokes bend and quickly spring back into place after the grinding is done.

Remember, though, the individual capabilities of these tires vary, some for street and some for offroad. But they are all just minor tweaks of the same basic formula.

Of course, some may still resist giving credit to these tires, saying that they look weak. After all, it’s not solid and it’s not solid steel. But don’t listen to them. Airless tires certainly provide all of the same benefits as standard pneumatic tires, but even better, they don’t have any of the drawbacks.

Tire Tech says, “These tires absorb terrain and impact just like pneumatic tires, but are nearly indestructible and not subject to the flats, cuts, rips, or tears like traditional offroad tires.”

Others have gotten a little more creative in their pitches. On their website, Polaris currently claims that their airless tires can take a .50 caliber round or get punctured with a railroad spike and still travel hundreds of miles after.

Shit, I couldn’t even imagine a more badass tire than that.