Earlier this month, Facebook blew up with a story about a 14 year old boy getting in a high speed chase after stealing his grandfather’s Hyundai Veloster.

During the chase, the raging adolescent sped through a local skate park, nearly hitting a number of children, as police attempted to stop him. In a released Youtube video filmed by an eyewitness, we can see it all and hear a horrified mother screaming, “GET OUT OF THE WAY!!”

Police were not able to stop him, though, as he continued to flee through the local neighborhoods. But that’s as far as the little s*** would get.

In a second video, we then see Bryson Rowley and his 2008 Dodge Ram 2500 heroically smash into the car, putting the high speed chase to a halt. In an interview with Fox News, Rowley says that he felt that he had to intervene because he was afraid of the safety for his and other kids in the neighborhood.

In the video, bystanders can be heard cheering as the truck’s back end flies up and black smoke shoots out from the exhaust, putting an end to the pursuit.

According to reports, nobody was hurt in the incident and the boy was arrested. But what about the heroes truck?

Well, now it appears that people from the small town have pitched in to repair the $7500 worth of damage. Bryan Ellison, owner of West Valley Carstar, is the leader of the charge, saying that he felt obliged to help after seeing the heroism on the news. 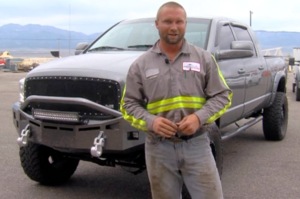 Ellison says, “I knew the insurance, because it was intentionally done, wouldn’t pay for [the repairs]. Just knowing that he could have saved multiple kids’ lives- the last I could do was get the truck fixed at no cost.”

In addition to Ellison’s help, others in the community have donated upgraded parts, as well. All in all, it is estimated that over $15,000 worth of work and parts have been donated.

Now, Rowley’s truck is back in his hands, better than ever. Rowley says, “It was more than expected. They went above and beyond the repairs that were needed. I’m just grateful that people stepped up like that- it sure helped out.”