With the World Cup reaching its boiling point this week, American interest in soccer has never been higher. That, of course, has a lot to do with our team’s surprising and outstanding performance in the world’s biggest sporting event.

In fact, with a victory or a draw over Germany on Thursday, the Americans will head into the knockout stage of the tournament, leaving them within striking distance of a top tier finish. By the way, in case you were wondering, the United States has not had a top 3 finish since the Cup’s inaugural event way back in 1930.

But what in the hell does 4wheelonline have to do with the World Cup?

Well, we are taking the time to bring you the top 5 Soccer Star cars.

So, let’s get it started. 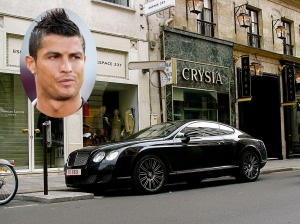 At number 5, we have the world famous Portuguese captain Cristiano Ronaldo and his Bentley Continental GT Speed.

Priced at around $230,000, the Bentley Continental GT features a 616 horsepower, W-12 engine. Many have proclaimed this car to be a throwback to the glory days of the 50s Bentleys. But for arguably the world’s best soccer player, Cristiano Ronaldo, the GT’s blending of power, style, and grace is just the perfect reflection of him on the field.

At number 4 on our list, we have today’s smoothest and most skilled player, Lionel Messi, and his Maserati GranTurismo MC Stradale.

In lavishing praise, Car and Driver says, “[The MC Stradale] promises to crank up the aural vibrato as well as the throttle response and curve-eating ability of the big coupe. On our drive, we found out that it does move the excitement needle for Maserati.”

All of this praise makes it’s the perfect vehicle for the legendary, and also highly praised, Lionel Messi.

At number 3 on our list, we have England’s prolific scoring machine, Wayne Rooney, and his Aston Martin Vanquish.

Sold at around $282,000, this English made car is one of the great “super grand touring” rides of recent memory, clocking in at a top speed 183 miles per hour. But what really tacks on the value to this car is its classic appeal and a long heritage of Aston Martin ancestors. The company was originally founded in 1913!!

Would we expect any other ride from Wayne Rooney, a born and bred Englishman? 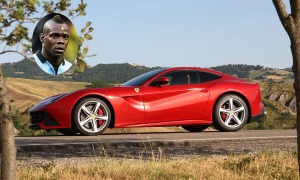 At number 2 on our list, we have the volatile and extremely talented Mario Balotelli and his Ferrari F12.

With an extremely decorated history and almost no bad cars to their name, the F12 still manages to stand out amongst other Ferraris by balancing power, speed, and surprising comfort. For Balotelli, it helps him exercise the demons and slip into game mode when he’s on his way to the field.

At number 1 on our list, we have American superstar, Clint Dempsey, and his custom Ford Raptor.

Typically, a Ford Raptor goes for somewhere around 45k. But Dempsey, in true American fashion, has taken his ride up to the next level.

In a buildup done by the Northwest Auto Salon, Dempsey had his truck customized with Fuel Hostage wheels, a new exhaust, shocks, a new grille, exterior bumpers, and a ton of other accessories. Basically, it’s a gear head’s dream ride, and that is why it has landed at the top of 4wheelonline’s list.