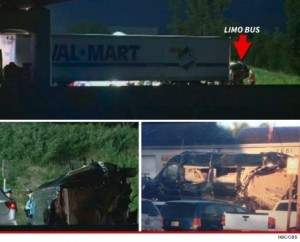 Today, it has been announced that the truck driver involved in the weekend collision that led to one man’s death and injured a number of others, including former SNL star Tracy Morgan, will be charged with vehicular homicide and auto assault.

According to reports, Kevin Roper, 35, was awake for more than 24 hours before the incident on the New Jersey turnpike. The wreck took place close to 1 a.m. Saturday as Morgan and others were traveling in a limo van after a just finished stand-up routine.

Sergeant Gregory Williams of the New Jersey State Police said, “The driver of the tractor-trailer failed to observe slow-moving traffic ahead. At the last minute, he swerved to try and avoid the Mercedes limo bus but struck it from behind, forcing the limo to rotate and overturn.”

Reports have also confirmed that Roper was a driver for Wal-Mart. Wal-Mart CEO, Bill Simon, has already released a statement saying, “This is a tragedy, and we are profoundly sorry that one of our trucks was involved. The facts are continuing to unfold. If it’s determined that our truck caused the accident, Walmart will take full responsibility.”

According to reports, Morgan suffered a number of injuries including broken ribs, a broken nose, a broken leg, and a broken femur.

Morgan’s publicist said in a statement, “We expect him to remain in the hospital for several weeks…He has been more responsive, which is an incredibly encouraging sign.”

For many longtime Tracy Morgan fans (myself included), this is certainly tragic news. Morgan, who grew up on the street and even used to sell crack, got his big break on Saturday Night Live and brought a street wise humor to the show that had never been seen before.

Some of his most memorable characters during his 8 year run on the show included the homeless Woodrow, Uncle Jemima, and African Andy.

Get well soon Tracy!! We already miss you!