Since 2001, Brazilian driver Helio Castroneves has been the most dominant racer at the Indianapolis 500. In fact, heading into Sunday’s race, his 3 wins over the past decade and change were more than all American drivers combined. So, it was no surprise to see Castroneves was once again in the mix going down the stretch of Sunday’s race.

However, 2014 would not be Castroneves year, but just by a hair.

During the final 40 laps of Sunday’s race, American racer Ryan Hunter-Reay dueled back and forth with Castroneves, exchanging the lead spot several times. Watching the race, it was easy to see that both drivers pulled out their best moves, the apex coming during one sequence in which Hunter-Reay nearly went off into the grass while speeding past Castroneves. It was as exciting as professional racing gets.

In the end, Hunter-Reay won the race by only .06 seconds, the second-tightest gap in Indy 500 history. As far Hunter-Reay was concerned, the tight finish only made the victory that much sweeter. 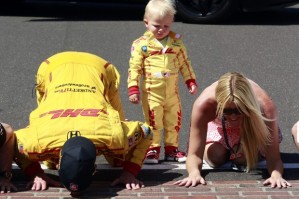 In an interview with ESPN, Hunter-Reay says, “I had to be aggressive. I had to come off Turn 4 low, so that Helio couldn’t draft up as well. I think that was the difference. Had I come off high, he’d have been right in my slipstream, and probably would have gotten by… As expected, this race was ridiculously close. I’m just glad I picked the right time to go.”

For American racing fans, Hunter-Reay’s victory was much welcomed. With most big name American drivers opting for NASCAR, Hunter-Reay was the first American to win the annual Memorial Day race since Sam Hornish Jr. won back in 2006. And, he was only the 3rd American driver to win since 1998.

Hunter-Reay said, “I’m a proud American boy, that’s for sure. This is American history, this race. I watched this race since I was in diapers sitting on the floor in front of the TV. When I was a kid I looked up to the Andrettis, Foyt, the Unsers, Mears… This was the top. Right here.”