Growing up, I was as big a fan of Batman as anybody in the world. I’m talking about cereal bowls, pillow cases, Halloween costumes… I had it all.

Obviously, this also meant that I watched all of the movies that ever came out, starting with the 1943 Batman serial, which featured a corny, out of shape Batman battling the Japanese madman Dr. Daka. If you haven’t seen it, check out the clip below (it’s a must see!).

After the 1943 version, I moved on to the ’47 version, then the Adam West television show, then the surprisingly good and dark cartoon show, and finally the Tim Burton Batman movies. I know, this is a lot of damn Batman!

Could they possibly do anymore with this series?

Well, in the early 2000s, as most people already know, Christopher Nolan made the definitive Batman trilogy. It starred the greatest Batman ever (Christian Bale), and it featured the greatest Batman villain ever (Heath Ledger). When the 3rd one came out in 2012, everyone was sure that the series would be put to rest, at least for a little while. Even I, the biggest Batman fan around was hoping that they would just leave it alone, so we could enjoy the ride that we were just taken on.

Studios wanted another big pay day. So, they decided to re-boot the franchise once again. This time, though, the big screen will be shared by both Superman and Batman, and the new Batman will be played by Gigli starring, Jenny from the block banging Ben Affleck.

Needless to say, I was disappointed. I mean, could they fuck up anything else?

As a huge Batman fan, I always took pride in hating Superman. I mean, Superman stood for everything that Batman wasn’t. He had super powers that made him virtually unbeatable, and he was lighthearted. Batman was neither of those. THEN, the announcement of Ben Affleck??? I don’t even know what to say to that, other than I wasn’t too excited

However, my mood shifted a little bit yesterday when director Zack Snyder released the first behind the scenes photos of the new Batmobile and Batsuit. (Check them out below)

Undoubtedly, the new costume and the new batmobile are pretty awesome, but how good are they when stacked up against the long history of Batman? Well, I’d say somewhere in the middle.

Actually, here is my list of the top 5 Batmobiles of all-time.

5. The 1939Cadillac Fleetwood 75 Convertible Sedan was the first ever on-screen Batmobile, and to tell you the truth, I love it. However, I kept it at 5 on my list because it’s lacking the essential Batman accessories.

4. Tim Burton’s adaptation of the Batmobile looks pretty awesome. However, this thing is way too long! I’d like to see somebody handle a corner on this thing.

3. Zack Snyder’s interpretation seem to blend some of the Tim Burton styles with the modern Tumbler. Until, we see it on screen it’ll stay in the middle of the list. But, I don’t see it taking the place of my number 1 and 2 choices.

2. As a variation of the 1955 Lincoln Futura, this car was just too cool. In fact, it is now a huge collector’s piece, owned by countless Rock stars and celebrities. 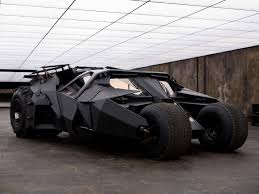 1. Could there be any doubt about this one? The Tumbler is the most powerful and dynamic car that has ever graced the screen. It is basically the perfect and most realistic interpretation of what the Batmobile should be.