Last month, in a Dutch city 60 miles outside of Amsterdam, a new glow-in-the-dark highway was revealed. The highway, known as N329, is 500 meters long and is painted with a “photo-luminizing” powder that absorbs energy in the daytime and releases a green glow at night.

This glow- which is wildly similar to those found in the infamous TRON world- is capable of lasting up to ten hours. This will undoubtedly help save on the electricity bills. 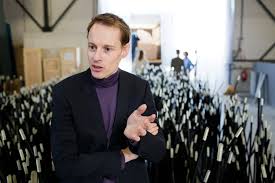 Designer Daan Roosegaarde says, “The government is shutting down streetlights at night to save money, energy is becoming much more important than we could have imagined 50 years ago. This road is about safety and envisaging a more self-sustainable and more interactive world.”

Adding to the impressiveness of the electrical savings is that the new highway is also capable of identifying freezing temperatures. When roads get too cold or slick, the highway displays ice crystal patterns to warn drivers, a feature that could prevent thousands of accidents and potential fatalities.

Of course, all of this is just the tip of the ice berg for Roosegaard’s team. In the near future, he wants to open up more of his fully realized “smart highways.” He is hoping that these highways will also feature driving lanes that can charge electric vehicles, as well as transmogrifying lane markings that can shift between solid and dashed lines depending on traffic.

Roosegaard says, “I was completely amazed that we somehow spend billions on the design and R&D of cars but somehow the roads- which actually determine the way our landscape looks- are completely immune to that process.”

Back in 2012, the “smart highway” concept was awarded the Best Future Concept at the Dutch Awards. Now, this debut highway is trying to work out all of the kinks before it is fully opened. Some of the recent problems include the light being darkened in rain and when met with too much moisture.

Roosegaard’s team, however, is not worried. In a released statement, they said, “As expected the ‘real life’ trial enables us to learn from the government and users. We will use these insights to introduce an update…As planned, we are working on developing Growing Lines version 2.0, which will be ready for this summer. It will then be introduced on a larger scale in the Netherlands and abroad.”