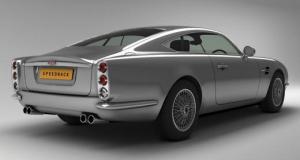 2014 has been the year of throwback styling, and yesterday’s unexpected unveiling of the new British Speedback followed suit. Ever since initial reports started to surface back in January, this car has been highly touted and anticipated. Well, it didn’t disappoint.

The Speedback will feature a 510-hp, supercharged 5.0 liter V8 engine built atop the renowned Jaguar XKR platform. Additionally, the car’s body is influenced by classic British GT styling and will include a hand built aluminum body and highly refined interior trim.

In an interview with Classic Driver, designer and company owner David Brown says, “[The Speedback] doesn’t slavishly follow the design of any one car in particular. There are many influences: the Ferraris, Lamborghinis, Aston Martins and Maseratis of [the golden era 60s] all had similar styling- call it a contemporary amalgamation of these beautiful cars.” 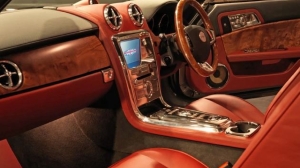 Brown- who shares a name with the famous Aston Martin founder- has been working on this vehicle for over two years. With an esteemed team of designers, engineers, and craftsmen, Brown has become a perfectionist in hopes of delivering a masterpiece debut car. At yesterday’s unveiling, he was quoted as saying, “The launch of Speedback is the realisation of a dream for me, and is the result of skilful and dedicated work.”

Early reports have this car going for $400,000! And, don’t expect to see too many of these cars out in public. Reportedly, there will be less than fifty made per year, but this all depends on what consumer demands look like.

Of course, the Speedback is not the only super-compilation-throwback car that has come out this year. In fact, building these highly ambitious cars seems to be the thing to do amongst rich billionaire types. Just check out the Equus Bass 770, which debuted two months ago at the 2014 Detroit Auto Show.

Like the Speedback, the Equus was a throwback compilation car. Only this vehicle drew inspiration from classic American muscle cars like the 60s era Ford Mustangs and early 70s Dodge Challengers.

Like the Speedback, the Equus was extremely expensive, going for more than 250,000 dollars and was the dream car of a reclusive European businessman.

The Equus debuted 2 months ago at the Detroit Auto Show

Both of these cars seem to be part of a growing trend inside of the automotive industry in which modern takes of classic cars are produced. Unfortunately, all of these “super cars” are going for top dollar, leaving us as nothing more than gawking, wide-eyed fans. This, of course, is much different than many of our favorite cars of the 60s and 70s.