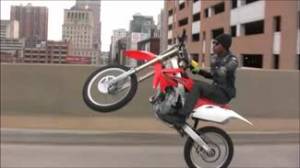 For whatever reason, the biggest energy drink companies in the world are attracted to the most dangerous sports that have ever been created. Red Bull and Monster regularly sponsor thrill seekers such as skydivers, skateboarders and rally racers. Maybe it’s the buzz from sugar that gets these daredevils going, or maybe it’s something else entirely.

Recently the Big Green M (Monster) picked up a new rider that is one of the best stunt motorcyclists in the world, and he’s barely old enough to have a driver’s license. Lil Chino out of Baltimore is a stunt rider unlike any other on a dirt bike. Click Here to learn more about the newest riders on Monster.