If you follow our News Refresh, you know that FCA’s CEO Sergio Marchionne has been looking to partner up with another automaker for quite some time.

Well, it looks like Sergio finally found a dance partner; but they don’t exactly make cars. 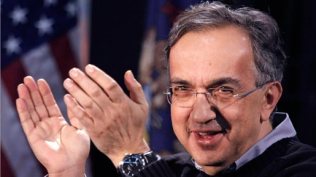 Google and FCA just announced their intentions to partner up to produce autonomous minivans together. Specifically, FCA will be providing a fleet of 100 Chrysler Pacifica Hybrid Minivans designed for Google’s self-driving applications.

Earlier, we talked about how Ford and Google were set to put a ring on it at the Consumer Electronics Show this year. That plan fell apart as Ford looked for more favorable deals with tech startups to produce FordPass. The Blue Oval isn’t the only one to turn Google’s deal down though.

General Motors recently walked away from Google’s offer over an issue over data control. For those with concerns over privacy like us; don’t label GM your hero just yet. The contention reportedly stems from who has control over the data, not if it is collected in the first place. Information on where you eat, shop, how much time you spend in the car, and more could all be a goldmine for whoever gets access to the data. In fact, using that kind of information in conjunction with advertisers is pretty much how Google built its empire.

Data control hasn’t just been an issue for GM, though. BMW and Daimler recently ditched Apple’s similar negotiations for their secretive “Project Titan”. It seems most car manufacturer’s don’t want to feel like they’re doing all the heavy lifting while tech giants are the sole beneficiaries of data-driven profits.

Fiat Chrysler, on the other hand, sees a deal with Google as a game-changer. FCA hasn’t exactly been at the top of the autonomous car race, but a partnership with Google all the sudden has them competing for 1st place. Fiat Chrysler’s also the smallest of the Big 3 and Sergio Marchionne’s desire for teaming up with other companies lays fertile ground for a fruitful partnership between the two.

Experts also agree. With KBBs Senior Analyst Karl Brauer saying, “If Fiat Chrysler is the smallest volume of the Big Three, but suddenly is paired with someone like a Google and their resources, it kind of immediately changes the playing field”. He also adds the benefit for Google saying, “Both of those companies jump to the front of the line.”

Indeed, FCA’s manufacturing experience and Google’s tech experience seems like a match made in heaven. But the deal is non-exclusive and ultimately low risk for both companies. Still, Fiat Chrysler remains the first and only company set to integrate Google’s self-driving systems right into their vehicles. With Sergio Marchionne seemingly being the only one willing to partner with tech giants, it may remain that way for a long time.

The 2017 Chrysler Pacifica. Is this the car of the future? We kind of hope not.

Do you think Google and FCA’s partnership will be a gamechanger for either company? Let us know in the comments below.