Ducati. The name is synonymous with words like hot, sexy, fast, and drool worthy. The 1299 Panigale S is no exception to any of those. Throw in powerful and supercomputer and you’ve got one hell of a sweet ride.

Yea, I’m late, I know. I get the Red Bull magazine, the Ducati is in the September edition, and it sure as hell caught my eye enough to want to write about it. No need to give me sh*t for being late.

Back to the hottest superbike I’ve seen in a while…in red at least. When it comes to bikes, I’m a black, yellow, or orange colored kinda girl. Also, the Mission R is pretty damn hot too, but I’m talking Ducati 1299 Penigale S right now. Maybe I’ll talk about that at a later date. 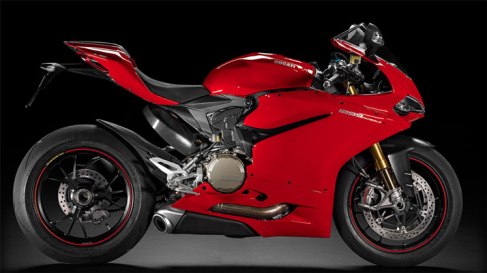 The 1299 Penigale S has the Superquadro engine with a 116mm bore – yes, you read that right – that puts out 205 horsepower and 145Nm torque. It also has forged Marchesini wheels, an LED headlight, and a smart semi-active suspension system. The Penigale S also has inertial sensors to constantly adjust suspension settings and brake parameters per the rider-selected modes. Throw in an electronic steering dampegoverned by the Öhlins Smart EC System and you’ve got a dream superbike.

Did I say how hot this bike is?