Paul Newman was one of the coolest cats that ever graced the Hollywood screen. He was Cool Hand Luke; he was Butch Cassidy; he was a complete, undeniable, larger than life bad ass. He won Oscars and Golden Globes and slept with beautiful Hollywood starlets. 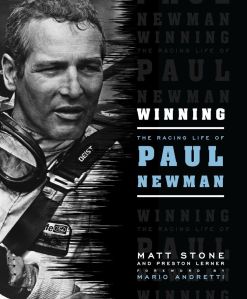 For most, that would be a dream life in itself. But Newman was always one for pushing the boundaries, and at age 49, the guy upped his Cool Hand credibility to an even higher degree by putting his multi-million dollar acting career on the back burner to pursue a new, thrilling venture…. a racing career.

During the second half of Newman’s life, this racing career would stand as the most important venture of his life. He invested into drivers and technology and teams, and he got behind the wheel and raced.

“I don’t like talking about acting because that’s business and pretty boring,” Newman once famously said. “And politics can get you in trouble. But I’ll always talk about racing because the people are interesting and fun, the sport is a lot more exciting than anything else I do, and nobody cares that I’m an actor. I wish I could spend all my time at the racetrack.”

Fascinating, right?? Absolutely!! And that’s why Adam Corolla– yes, the former host of the almighty Man Show— has helped to create an all-new documentary about the actor’s life. Above, we have the official trailer to that documentary, and let me be the first to say it… it looks awesome!

Carolla, of course, agrees. In fact, he can’t believe that he was lucky enough to have the opportunity to put this documentary together. In an interview with FilmBuff, Carolla says, “There were so many incredible stories about Newman over his 35-year racing career and I was amazed that no one ever wanted to commit to telling his story.”

Fortunately, we will all be able to hear and see all of the stories on May 22nd– the film’s official release date.

3 thoughts on “Check Out the BRAND NEW Trailer for “Winning: The Racing Life of Paul Newman””