In 2014, Jeep had its best selling year in the brand’s long, 7+ decade history. Riding that wave of success, Jeep is now expanding its operations in every major market across the world, including top markets like China and Brazil.

“Jeep is iconic and not just in North America,” said Jeff Schuster, an analyst with LMC Automotive, in an interview with Bloomberg. “The brand has had aspirations to grow internationally and sees doing so as an important element for the entire FCA group’s success.”

What are their immediate goals?

Well, after selling more than 1 million vehicles in 2014, Jeep hopes to amp that number up to 1.9 million this year and continue to grow in the years to come. For Jeep, who now has a serious international backing (Fiat Chrysler), the brand has never been more equipped to dominate on a global scale. 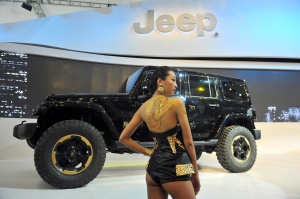 In order to make this happen, though, company executives agree that China needs to be their major target zone. After all, with nearly 1.4 billion people and millions of acres of off-road terrain, there couldn’t be a more ideal customer base.

“Getting the launch of China right is very, very important as it is one of the major cornerstones to get to the 1.9 million target,” said Jeep CEO Mike Manley in an interview at the Geneva auto show. “We are [currently] on track in China, everything we monitored in terms of the Cherokee pre-production looks good.”

According to Jeep, the company is planning on expanding dealerships in China from 160 to 220, in Brazil from 30 to 120, and will also enter the Indian market for the first time.

That, to us, sounds like a good recipe for a worldwide Jeep takeover.